Home > Blog > Will IoT Devices Be Compatible with Private LTE and Private 5G?

Will IoT Devices Be Compatible with Private LTE and Private 5G?

Private LTE is a scaled-down version of the public cellular network with all the same components defined by 3GPP standards. It must abide by those standards, so it retains the look and feel of a public LTE network but covers a smaller, private area and fewer users. Instead of all data going back to the central core of a mobile network operator, it stays local, and the evolved packet core (EPC) can be implemented in a server on the premises. Keeping the data on the premises adds a layer of security and control that many enterprises desire. 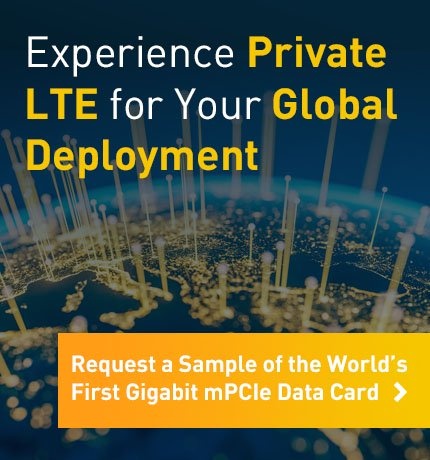 Led by the CBRS Alliance’s OnGo service’s success since its launch in September 2019, North America is expected to become one of the highest growth areas for the private LTE/5G market over the next several years. Many OEMs are producing devices that support CBRS Band 48 for use in North America and creating products that support private LTE/5G bands in other areas of the world, such as Bands 42 and 43.

Traditionally, private LTE has been an enterprise-level operation because of the costs of deploying a private network. However, with the introduction of unlicensed bands, that cost is diminished, and private LTE is within reach for many additional emerging markets.

As private LTE/5G networks expand, pioneered by efforts like CBRS OnGo in North America, OEMs worldwide can produce compatible devices for use across a vast swath of industrial and commercial verticals. While Wi-Fi will continue to be part of connectivity for most industries — especially with the introduction of Wi-Fi 6 — private LTE/5G will play an essential role for particular use cases in which it will rival the performance of wired LANs.

Telit, a global enabler of the Internet of Things (IoT), has vetted experience helping organizations support the development, commercialization and adoption of LTE and 5G solutions. Telit was the first top-tier IoT and mobile broadband module vendor to join the CBRS Alliance to help drive innovation and the adoption of private LTE/5G networks, giving enterprises new options for site, campus and office wireless networking.

Contact us today  to find out how we can help bring your organization a full-suite IoT solution.